Professor Jing Yu received a B.S. degree in mathematics from National Taiwan Normal University in 1972. Afterwards he went to the United States and studied mathematics at Yale University with Serge Lang. He went back Taiwan immediately after receiving his Ph.D. degree in 1980.

Since then, he conducted many courses and seminars in number theory in many major universities and he has done many major works in the arithmetic of function fields, espceially the transcendence theory. His courses, seminars and research works have great impact on the development of number theory in Taiwan. Moreover, he is also a worldwide leading expert in the theory of Drinfeld modules.

His contribution has been greatly appreciated and recognized by receiving many outstanding awards in Taiwan. Currently he is a National Chair Professor, an eminent title endowed by the Ministry of Education. 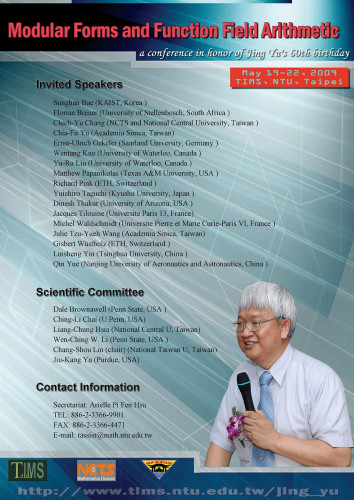