Complex fluids are found in many important physical, biological and engineering applications. Examples include industrial macroscale flows such as polymer extrusion, small scale flows such as those found in and around cells in systems biology, geophysical flows as in subsurface contaminant transport, carbon sequestration and chemical injection for oil recovery and multi-phase (component) flows such as combustion of powders, solid (coal) particles in flames, and droplets in air (clouds).
Ions in water are so important in biology that they can be called “the liquid of life”. Ions in water are a complex electrorheological fluid. Using energetic variational approaches, we may derive a system of partial differential equations describing the flow of ions in water and through channel proteins (called ion channels) that allow ions to cross otherwise insulating membranes of cells.
Ion channels are proteins with a hole down their middle that control an enormous range of biological processes, in health and disease. Ion channels are responsible for signaling in the nervous system; they control the contraction of skeletal muscle. Ion channels coordinate the contraction of the heart so it can act as a pump. Ion channels are involved in the secretion and absorption of substances from every cell and tissue, the kidney, intestine, liver and so on. Many diseases (’channelopathies’) are produced by genetic defects in channels, of which cystic fibrosis is perhaps the most widespread. A large fraction of all drugs act on channels. Channels have a role in biology rather like the role of transistors in a computer. Transistors are valves that control the flow of holes and electrons. Channels are (nano)valves that control the flow of positive ions (like sodium, potassium and calcium) and negative ions like chloride.
There are thousands of different types of channels that have different biological functions. Most channels are specific for one type of ions, allowing sodium, potassium, calcium or chloride to move and not much else. Recently, the flow through channels has been successfully analyzed by a modification of the PNP equations of transistor physics. If the finite size of ions is included in these equations, they deal remarkably well with the equilibrium specificity of channels for ions. Energetic variational analysis can explain and expand this understanding to the nonequilibrium situations in which ion channels actually function, thereby directly confronting the enormous biological literature on channels in health and disease. Mathematics and physics is needed to deal with channel behavior. 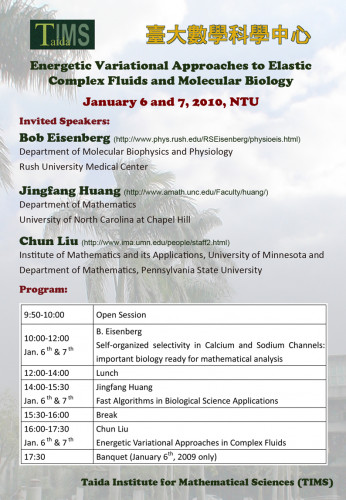